Bridget Otto, a nurse in Iowa City, Iowa, has been caring for Covid-19 patients since March. When her own father got sick at the end of September and spent weeks in the ICU, the pandemic became even more personal.

“He was an active farmer, and he was climbing up and down grain bins and out of equipment to ‘I can’t move my hands and legs,'” she
told CNN affiliate KCCI. “And it’s just a result of being on a ventilator for four weeks, sedated and paralyzed and not moving.”

Now, he’s still on oxygen support, but he’s recovering steadily, Otto said. But that’s not the case for all of her patients.

“I just want people to know that there is a real, true suffering out there and it is a direct result of this virus,” Otto said. “It’s not ‘if’ you’ll be affected someday, it’s ‘when.'” 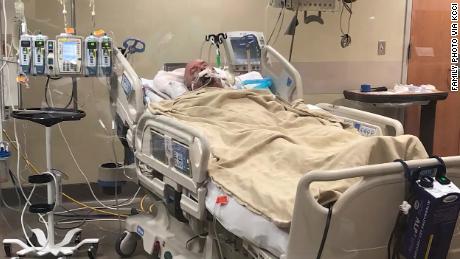 Across the country, as cases of Covid-19 surge
in almost every state, some people are not
taking the virus seriously. But Otto said she and other nurses see the damage the virus causes in the ICU every day.

“A lot of people don’t see what we see, or don’t believe it,” she said. “We don’t really have a choice to believe it or not in our ICU since we see it.”

And as many Americans gear up for holiday travel — against the recommendations of many public health experts — she said she’s staying home this year.

“I don’t want to miss out on holidays either,” Otto said, “but I’m going to. It’s the right thing to do.”

More than
250,000 people in the US have been killed by Covid-19, and experts say it’s only going to get worse, especially as the holiday season approaches.
Some physicians have already predicted
an “unprecedented surge” of Covid-19 cases in the US
after Thanksgiving, as people travel to see family.