Researchers in South Africa have documented the case of a woman with HIV who has been infected with COVID-19 for months and has seen the virus mutate inside her.

The woman, who is 36, first fell ill in September 2020 and has been testing positive for the disease for more than seven months.

What’s more, the virus that continues to stay in her body has undergone more than 30 genetic changes.

The team, from the University of KwaZulu-Natal in Durban, says the findings present the first real evidence that patients with untreated HIV can have an impaired immune system that allows coronavirus to take root and mutate into potentially deadly variants that could spread to others. 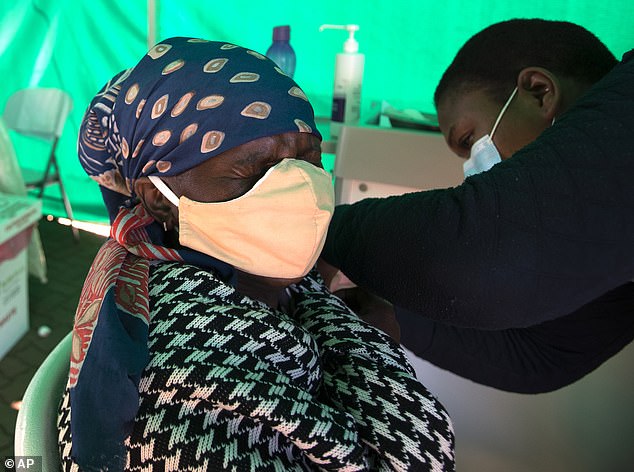 A South African woman, 36, with uncontrolled HIV became infected with COVID-19 in September 2020 and was infected for seven months. Pictured: A retiree receives the first dose of the Pfizer coronavirus vaccine in Johannesburg, South Africa, May 24

Six months after she became ill, two of her three medications she was taking to treat her HIV were switched and, after her viral loads were suppressed, she finally tested negative for COVID-19 (above)

Currently, the United Nations estimates that 7.5 million adults and children in South Africa are infected with HIV (immunodeficiency virus).

Once a person contracts HIV, the virus sets about attacking and destroying immune cells that normally protect the body from infection, and can lead to the potentially deadly disease AIDS.

In South Africa, HIV infections often go undetected and nearly 10 percent of people are believed to be unaware that they have the virus.

According to the Centers for Disease Control and Prevention (CDC), HIV patients who are on effective treatment are not at higher risk for contacting the virus or suffering more severe complications.

However, the findings from the study, posted on pre-print site medRxiv.org, are the first evidence to suggest that HIV-infected people can have the virus mutate in their body multiple times.

The South African patient was diagnosed with HIV in 2006, but doctors had been unable to control her viral load with tradition antiretroviral therapy.

The combination or ‘cocktail’ of drugs suppresses a person’s viral load until it is virtually undetectable, meaning it cannot be transmitted.

The woman visited a hospital in September 2020 after having symptoms including a a cough, sore throat and difficulty breathing for 12 days.

She tested positive for COVID-19, was given oxygen and discharged after nine days.

However, even after being discharged, tests continued to come back positive, which continued for 216 days.

Researchers found that the virus underwent 32 genetic changes, 13 of which were linked to the spike protein, with the virus uses to enter and infect cells.

Researchers found that the virus mutated inside her body 32 times (above), including 13 changes to the spike protein the virus used to enter and infect cells

During this period, the woman was one of 300 participants enrolled in a study was finally able to clear the infection exploring the effects of HIV on COVID infection.

Six months into her research, two of the the medication in her ‘cocktail’ were changed and, within two weeks, her viral loads were suppressed.

It is too soon to say whether or not the woman is a unique case but, if she is not, it could mean that patients with uncontrolled HIV could spread potentially deadly variants.

They could ‘become a factory of variants for the whole world,’ lead author Dr Tulio DeOliviera, a geneticist at the University of KwaZulu-Natal, told the Los Angeles Times.

He added that expanding HIV testing and treatment ‘would reduce mortality from HIV, reduce transmission of HIV, and also reduce the chance of generating new COVID variants that could cause other waves of infections.’