Coronavirus infections have been rising again over the past two weeks, but serious illness and death remain on a downward trend, indicating that Israel’s vaccination campaign is helping to prevent a major resurgence in morbidity.

On June 14, there were 206 active cases in Israel, a figure that had risen to 1,254 as of Monday following a series of local outbreaks.

Since then, only a single COVID-19 fatality has been recorded in the country and serious cases have declined from 30 to 22.

The spike in cases has had no apparent adverse effect on these numbers, apparently due to the high vaccination levels among older Israelis and those in at-risk groups. Most of the recent cases have been among young people, who are less vulnerable to serious illness.

According to the latest Health Ministry figures, 51 percent of active infections are among Israelis who are 19 or younger and 77.3% of those hospitalized in serious condition are unvaccinated.

Additionally, the number of new cases and the positive test rate have slowly decreased in the past few days since over 200 infections were recorded both Thursday and Friday, the highest daily caseloads in over two months.

Vaccination rates have also began ticking up again in recent days as the government pushes for children aged 12-15 to get immunized. 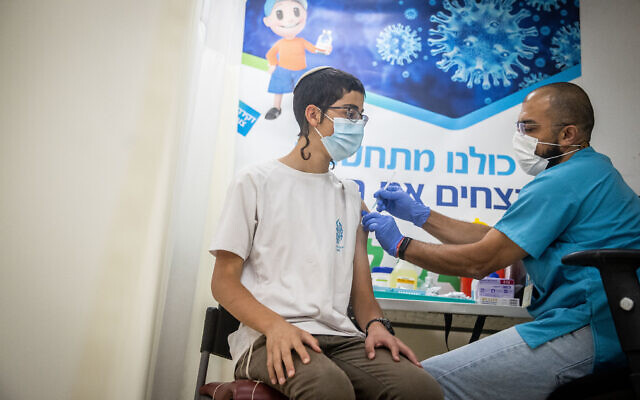 An Israeli receives a COVID-19 vaccine at a Clalit vaccination center in Jerusalem on June 24, 2021. (Yonatan Sindel/Flash90)

Much of the recent uptick in cases appears concentrated in several municipalities, some of which were further downgraded Monday on the Health Ministry’s “traffic light” point system for measuring the severity of morbidity in a given community, as cases there continued to rise.

To combat the rising infections, the Health Ministry reimposed the indoor mask mandate on Friday and the government has moved to tighten rules on travel, amid concerns that the recent surge was being fueled by the entry of the more contagious Delta variant to the country.

Meeting Sunday evening for the first time since a new government was sworn in, the coronavirus cabinet discussed increased testing and enforcement on Israel’s borders and a boosted effort to vaccinate teens — but did not add any major new restrictions.

There have been a total of 840,995 confirmed cases in Israel, and 6,429 deaths from the virus since the pandemic began. Over 5.1 million out of Israel’s population of nearly 9.3 million people have received both vaccine doses; more than 5.5 million have gotten at least one shot.

I’m proud to work at The Times of Israel

I’ll tell you the truth: Life here in Israel isn’t always easy. But it’s full of beauty and meaning.

I’m proud to work at The Times of Israel alongside colleagues who pour their hearts into their work day in, day out, to capture the complexity of this extraordinary place.

I believe our reporting sets an important tone of honesty and decency that’s essential to understand what’s really happening in Israel. It takes a lot of time, commitment and hard work from our team to get this right.

Your support, through membership in The Times of Israel Community, enables us to continue our work. Would you join our Community today?

Join the Times of Israel Community